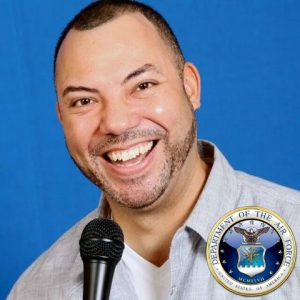 Brett James was born to serve. A second generation Air Force Veteran, Brett retired as a Master Sergeant with 20 years spent in the enlisted ranks. On advice from friends and family, he took flight on a career in standup comedy in 2012 after returning home from a high-stress deployment to Yemen. His hilarious perspectives of both military and civilian life have contributed to delighting crowds all over the country. He is already a feature comedian in clubs across Mid-America, a known performer at many comedy festivals and often entertains U.S. servicemen and women across the globe. Most recently, he was awarded the title of “Oklahoma City’s Funniest Comedian for 2016.”